For One Brief Moment, We Can All Live Forever 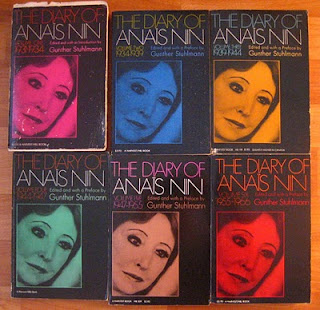 Luise Rainer is the oldest living Oscar winner.  I learned that in the recent Oscar issue of Entertainment Weekly.  She's now 102 years old.  The last time I read her name was back in the early 1990's in the diaries of Anais Nin. I used to skim through them at the World's Biggest Bookstore during my lunch breaks.  I didn't know anything about Anais Nin, but I liked how the covers of each volume of her diaries had the same picture of her face but shaded in a different color. Eventually, I read her diaries and got hooked.  She made me fascinated about what life was like for an artistic, creative female writer living in Paris in the 1920's. Whenever I read books of people who lived many years ago or see a movie made in the early 20th century, I can't help but think that their heyday has passed and most of them aren't even alive anymore.  In the early 1990's, a few of the people mentioned in the Nin diaries were still alive.  I particularly remember that Anais's youngest brother, Joaquin, was still alive and over 90 years old. It was weird to think that there was still someone around who had lived all those experiences that Anais wrote about who could possibly still remember all those things.   But years later, the next time I googled Joaquin, I found out that even he had indeed passed.  It seemed the allure of the 1920's was over.

Which is what I thought when I first watched the 1929 movie "The Broadway Melody," the very first musical made in an era of only silent movies.  It was about two singing sisters and their struggles to make it from vaudeville to Broadway.  It was SO dated. I couldn't believe the silly hand gestures the performers made as they rehearsed their numbers, and as I watched, I couldn't help but think how all of them had passed away by now.

The next day, I googled the names of the women who played the two sisters to see when they died.  First I googled Bessie Love.   She indeed had died in 1986 at the ripe old age of 87.  Then I googled Anita Page.  I thought it was a mistake when I saw that Anita Page had no year of death next to her name.  When I read her entry, it said she was now 97 years old and living in California!  The next night, I watched the movie again, and as I watched Anita Page on the screen, I imagined her getting ready for bed in California, how the weather must be beautiful this time of year, and how she was not only living on the screen, but she was living in real life as well.

I decided to find out if she had a MySpace page.  Before Facebook hit it big, MySpace was the place to be.  MySpace was great because you could actually connect with celebrities.  I remember being MySpace friends with Danielle Brisebois of "Annie" and "All In The Family" fame.  And you could tell that she took care of her own page, so when she accepted my friend request, she actually saw my name and picture and clicked "Accept."  Many other celebrity profiles were run by fans and not the actual celebrities.  But if you were early-MySpace savvy, you could tell which was which.

So I found Anita Page's MySpace page which only had about 20 friends total!  I friended her and wrote a very brief message saying that I had just seen "A Broadway Melody" of 1929 and really enjoyed it.  I never expected a message back and was so surprised the next day when I received this really brief message saying, "Thank you (written as one word "thankyou") for your message.  I'm so glad you enjoyed 'A Broadway Melody.'  I didn't like it back in its day and always thought it was Bessie Love's picture.  I do like it now though."  Was it from her?  A 97 year old woman?  I never found out for sure.  But when she passed away about a year later at the age of 98, this man wrote a message thanking her fans, and again, "Thankyou" was written as one word.  The same way it was written on the message to me.  Obviously my message was written by this same man.  No one writes "Thankyou" as one word. Was she mentally acute enough that when he told her about my message, she told him what to write back?  Or did he just know she'd respond that way and wrote AS her?  I'd like to think it was the former rather than the latter.

I feel that as long as there are people who are still alive from a certain era of time, their era never really leaves us, and some of its magic still surrounds us.  I watch the 1970's TV show, "Maude," at 10:00 p.m. every night. My parents used to watch reruns of it at that very same time slot when I was in grade school. Conrad Bain and Bill Macy, the two male stars of the show, are still alive. I feel like as long as they are alive, then that period of time from my childhood when I was tucked into my warm bed, feeling protected, will never go away either.  Luise Rainer is still alive, and Anita Page was waking up on California mornings the days after I watched her in all her youth in a 1929 movie.  We can pretend for one brief moment that no one really dies.   If we try hard enough, we can convince ourselves it's so.
Posted by Chrissi at 1:23 PM 2 comments: