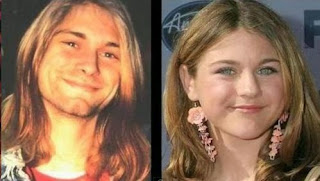 I recently watched "Montage of Heck," the new documentary about Kurt Cobain, the lead singer/songwriter of legendary, early 1990's, grunge band, Nirvana. It was put together by his daughter, Frances Bean Cobain, who was only a year old when Kurt shot himself on April 5, 1994. For Generation X-ers, the exact details of where we were when we found out Kurt died is as ingrained in our minds as the details of President Kennedy's assassination is ingrained in our parents'.

In the early 1990's, I lived in Toronto, Canada. I hated it and couldn't wait to move back to New York. My only saving grace was that I spent most of my hours working at HMV Record Store where I could listen to music and watch videos all day. My introduction to Nirvana was the video "Smells Like Teen Spirit." I didn't know there was anything special about it until my co-workers began obsessing over it, saying how amazing this new band was. We played the video day and night, many times, for many days. It got to the point where I felt that if I had to see that janitor with the mop one more time, I would start needing sedation to finish my shifts.

Torontonians hated Americans. It was that simple. I had thought Canada was our friendly neighbor to the North, but the day I arrived, I saw anti-American sentiment spewing out everywhere. Before HMV, my first job was as cashier at a small Kresge's (one of the last in existence not renamed "K-Mart"). My manager had the same radio station playing near my cash register every day, and every single day, the DJ made at least one anti-American comment, such as "Well, it's a movie made by Americans, so we already know it will be stupid." Eventually, I got so tired of it, I changed the station to an alternative music station which my manager didn't like, but I didn't care because through it, I'd discovered the new British band, Lush!

At HMV, the anti-Americanism continued with my co-workers asking me how I could stand New York "where everyone is just running around with guns in their hands." I informed them that the first time I'd ever seen a gun drawn was last week while I sat inside a Toronto streetcar when the cops pulled out their guns to arrest someone outside on the street in front of us. I did have one co-worker though who actually liked Americans and American culture. His name was Harry, and he told me that the reason why guns were more prevalent in American culture than in Canadian culture is because our "Right to Bear Arms" was implemented so the government couldn't physically take over its people. It enforced the rights of the individual. I know that sounds idealistic, but I'd finally found a friend I could hang out with that didn't make anti-American digs at me any time the term "The States" came up!

One afternoon, my co-worker, Erin, came into HMV saying, "Did you hear? The lead singer of the Cocteau Twins got killed in a plane crash!" About six months later, Harry and I were chatting when he said, "Yeah, one day at my old job, I spread a rumor that the woman from the Cocteau Twins died." He was laughing about it. "That was YOU?!!" I exclaimed. "Yeah," he said. "I got really sick of everybody raving about that stupid band so I made it up." I couldn't believe it! Back then, there was no internet to check facts, so I'd spent that entire day depressed about it!

But I didn't hold that against Harry. I found it pretty funny. Apparently, I must enjoy the company of shit disturbers because they always seem to be around me in one form or another. But most Torontonians were polite to a fault, sometimes to their own detriment. Everyone at HMV ate lunch at this Thai restaurant around the corner called "Salad King." Yes, the food was out-of-this-world delicious, but the owner was pure jerk. Because we were around the corner, HMV staff got a 5% discount, but whenever I ordered my lunch and mentioned the discount, he'd say, "If you keep saying that so loud, I'm not going to give it to you!" The other ridiculous problem I had with him was asking for the grilled cheese. "It's only $2.00!" he'd say. "I can't tie up the lunch crowd's grill for a $2.00 sandwich!" "But it's on the menu board!" I'd say back to no avail. Yet when I told my stories, all of my co-workers sided with Mr. Salad King, all except Harry who said, "One time I asked him to give me another mayonnaise, and he told me 'no,' said too much mayonnaise is bad for you!" Yes, Salad Son-of-a-Bitch.

Now back to Kurt: One afternoon, I was in my kitchen putting down newspaper for my adorable, but poorly house-trained, Yorkie, when I stumbled upon an article reporting Kurt's suicide attempt in Rome. I was shocked, and I said to myself, "Imagine if he died? What a life-changing event that would be for all of us!"

The very next month, I was out on my lunch break with Harry. He had already quit working at HMV, happy to be away from the corporate bullshit which wore us both down eventually, but I remained working there, and he met with me one afternoon. After we ate, he decided to walk back with me to say 'hi' to some other friends he had at the store. As soon as we stepped inside, I heard "Lithium" blaring through the speakers which was the only Nirvana song I really liked. Derek the DJ immediately approached us and said, "Kurt Cobain is dead. Yeah, they don't know all the details, but rumor is he shot himself." WHAT??!! One of the first things I thought about was his wife, Courtney Love, and their daughter, Frances. For the past few days, we had been playing the "Miss World" video from Courtney's band Hole's new album which hadn't even been released yet. And now, every time I'd see her, she'd be a widow.

There's been a lot of Courtney-bashing over the years, but I really like her. She's got guts and will do anything a male rocker will do, including stage-diving into the audience. She's real about herself: both her shortcomings and her strengths. When talking about Kurt, she said: "He didn't have one atom of rock-star ego, and he needed it."

This is the mantra I've taken from that day: "Have guts, be honest and be yourself. Otherwise this world will destroy you."


P.S. The documentary is brilliant. The only thing that SUCKS is that he died before his daughter ever got to know him. 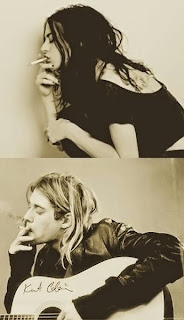 Posted by Chrissi at 5:47 AM No comments: