Why Sci-Fi Should Be Called Psy-Fi 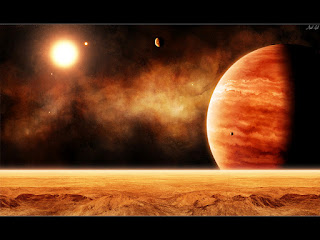 Earlier this month, NASA successfully landed a rover named "Curiosity" onto the surface of Mars, the Red Planet in our solar system. This project was developed to see if there is now or ever was life on Mars. Ray Bradbury would be proud!  He is my favorite short story writer who passed away in June at the ripe old age of 91, only two months before Curiosity landed. In fact, Curiosity might not have been landed at all if it weren't for Ray Bradbury!  Many scientists were inspired to explore Mars solely due to their reading of Ray Bradbury's 1950 novel, "The Martian Chronicles." That man had some mind.  His writing predicted many events.  His 1953 novel entitled "Fahrenheit 451" predicted how television would take over our lives with giant screens taking up space on every single wall in people's living rooms.  In my case, I'm glad that TV has taken over because I feel it helps me escape from the stress of my everyday, realistic, life.  Science Fiction TV, particularly "The Twilight Zone," is a place I can go to when I want to get away for an hour or so.  That's why I think "Sci-Fi" should be called "PSY-fi!"

Watching these episodes where people are constantly faced with problems of gloom and doom help me get my anxiety out.  As I watch, I feel anxious for these characters, yet I know it's a totally different world from my own, and even as I experience their dilemmas as they do, I'm still not in danger of coming to any harm. My favorite "Twilight Zone" episode, "The Midnight Sun," is a perfect example.  Two women are dealing with their apartment building getting hotter and hotter, there is a water shortage, and people are evacuating, heading north where it's a bit cooler because scientists say that the Earth has moved out of its orbit and is moving closer to the sun.  But by the end, it's suddenly really dark, and the mercury on the thermometer has dropped so low that the numbers are nearly unreadable.  It has gotten frightfully cold.  Turns out the woman was dreaming, and she was only hot because she had a fever.  The twist is that the Earth is not moving closer to the sun, it is actually moving farther away!

However, it's not always anxiety I need to release when I feel stressed, sometimes I just want to imagine a more pleasant world than my own.  One of the happier "Twilight Zone" episodes is from the 1980's remake of the series.  An episode called "The World Next Door" is about one of my favorite science fiction topics: parallel worlds.  Actor George Wendt (best known as Norm from "Cheers") stars in this one as a character named Barney who is a failure as an inventor.  He has a basement workshop, and when his wife orders him to clean it up and get rid of his mess of inventions, he destroys a bookshelf and discovers a door that leads straight into another house's wine cellar. A woman's voice from the top of the stairs calls "Barney" to come up and rejoin the party, except that the woman is referring to the "Barney" who lives in the house with the wine cellar.  He is a successful inventor famous for inventing something having to do with the fuel system for cars. Yet since they are identical Barneys each living in a parallel world, it is no problem when instead it is the failed inventor Barney who decides to go upstairs and join the party.

Turns out wealthy "Barney" is not happy either.  He wants to live a simple life, so the two Barneys switch places.  Failed inventor, Barney, brings one of his flopped inventions to this new life where here it is a success, and famous "Barney" has cleaned up the basement and is set to live a normal life with failure Barney's now-contented wife! Don't we all wish sometimes that we could escape to a parallel world where things are almost the same as our real lives but we've made improvements in the areas we see fit?

I think all of us have things we rely on to escape from our chores and the hustle and bustle of our busy lives. Mine is good Sci-Fi TV, because, hey, if on certain days, I find myself struggling to figure out a way to pay the bills, at least I can reassure myself that the world most definitely is not moving farther away from the sun!

Posted by Chrissi at 1:45 PM No comments: