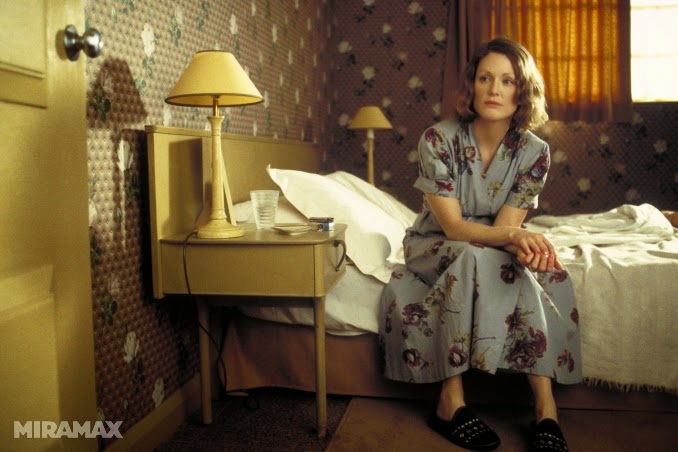 Recently, the author/reader site Goodreads e-mailed me requesting I provide a question for author Michael Cunningham's upcoming interview in their next newsletter. I've read two of his books, "The Hours" and "Specimen Days," and they are among my favorites. "The Hours" was made into a movie with David Hare as screenwriter and Stephen O'Hare as director.

The question request from Goodreads got me thinking about "The Hours" movie which takes place in three different time periods involving three different, yet connected, women. The first plot involves real-life writer Virginia Woolfe and takes place in 1923 while she writes her novel "Mrs. Dalloway." The second plot takes place in 1951 and has Laura Brown reading the novel "Mrs. Dalloway." The third plot's lead character is Clarissa who is living a life similar to Clarissa in the "Mrs. Dalloway" book because she too is getting ready to host a party and she continuously finds herself focusing on mundane matters, like the details of her party, rather than facing her real-life problems. I've always felt that the Laura Brown character, played by Julianne Moore, got the least attention in the public's reception of the movie, yet her character is the one who moved me the most.

Laura Brown is a housewife whose son is always following her around. She finds this difficult to deal with because she is an introvert with a comprehensive interior life. She is an avid reader which makes her comparable to creative artists who usually have a constant running monologue in their minds where they build their own story plots or obsessively mull over an idea they're trying to figure out. Having a child or anyone interrupt this inner monologue can be unbearable at times. People like Laura Brown are often not interacting with the world around them which is hard for those who don't have this steady dialogue in their heads to understand. When they need to be, they are fully focused on the tasks at hand, but as soon as they are able to, they once again become completely disconnected to the world around them. They are focusing on their monologues, and it's painful for them to be pulled out when they're not yet ready to go. So between her son always watching her, and her husband always lavishing attention on her, she often feels the need to escape. Her husband seems to think she is perfect, and the problem with someone thinking everything you do is perfect is that it's unbelievable. No one is perfect.  This impossible perceived standard Laura lives under causes her to feel anxious and often like a failure.

An example of this is when she tries to bake a cake for her husband's birthday.  It comes out completely lopsided, and she is so devastated, she throws it into the garbage. Yet she knows that her husband would have loved it anyway no matter how awful it looked.  She and her son bake him another cake, but by now, she's had it.  She leaves the cake in the kitchen for him and takes her son to a neighbor's, claiming she has a hair appointment. Instead, Laura drives to a hotel planning to read more of Mrs. Dalloway and then to take pills and kill herself.  She feels she is smothering, and she needs to escape so she can just be alone, but she can't go through with it.

Later that night, Laura is in the bathroom talking through the door to her husband who is in the bed.  She mentions her friend's upcoming operation. He talks to her about it from the bed, but he has no idea she is breaking down and crying in there after he hears her say, "I'm terrified." That's the downside to having a rich interior life. You may be able to entertain yourself and be able to escape through reading books, but nobody ever has any idea of the catastrophic storm that goes on inside of you. Laura does wind up leaving her family and living on her own in Canada. I doubt Laura wanted to be this way, and she probably hated herself for it, but she couldn't fight nature.

I did come up with a couple of questions for Michael Cunningham's Goodreads interview, but neither of them had to do with Laura Brown.  If I did have a question about Laura Brown for him, it would be: "Do you think that if Laura Brown had written books instead of reading them, it would have enabled her to find that escape she so desperately yearned for?"

Posted by Chrissi at 4:12 PM No comments: