My Life With Marilyn 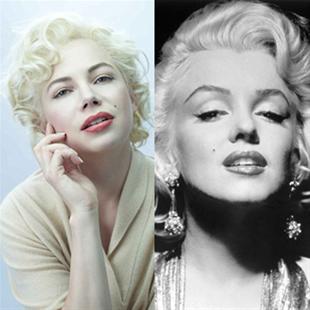 Now that "Dancing With The Stars" is over, and we know that the "Keeping Up With The Kardashians" show is a fake, what TV event can we look forward to next?  The Oscars!  Well, maybe I'm getting ahead of myself here.  But my current obsession is that I really want to see the movie "My Week With Marilyn" starring Michelle Williams!  Michelle Williams should get the Oscar.  From the clips I've seen of "My Week With Marilyn," it is the real Marilyn Monroe that Michelle Williams plays, not the icon. She studied Marilyn extensively to play this part and even tied a belt around her knees to get Marilyn's "wiggle walk" down. She watched all her films and read up on her on the Internet. It's been said that a man who worked on the original film, "The Prince and The Showgirl" (the film that Marilyn was working on during the "week" she befriended the stage assistant who wrote the book that the current movie is based on) was on the set of "My Week With Marilyn,"  and  apparently, as soon as Michelle Williams came onto the set, he grabbed the person next to him in disbelief and exclaimed, "That's Marilyn!"   If Michelle Williams doesn't at least get an Oscar nomination this February, I will be extremely disappointed!

I actually knew who Marilyn Monroe was before I knew who George Washington was.  We had a huge mirror of her in my parents' bedroom because my dad used to collect Marilyn Monroe memorabilia.  My parents were on a date when they heard the news of Marilyn's death on the car radio.  My mom said they were shocked, but my dad was particularly heartbroken. I used to ask my dad who he loved more, Marilyn or my mom.  To his credit, he always said he loved my mom more, but I was never really sure if I believed him.

Marilyn Monroe was an intelligent woman.  Most agree that comedy is often harder to play than drama.   After many "dumb blond" roles, Marilyn wanted to be known as a serious actress so she moved to New York City to study acting at the famed "Actors Studio." Marilyn always tried to improve herself and was merely playing up her "dumb blond" image, speaking in that high, breathy voice whenever she acted or was being filmed for interviews. One day I heard a tape recording of her speaking in her real voice. It was deeper and didn't contain any of those silly inflections that people identify her with. It really surprised me because she sounded like a completely different person. That's because she was a different person than the general public believed her to be.

Another misconception of her was that she committed suicide. My dad used to say that Marilyn died because of Robert Kennedy.  He read extensively on Marilyn, so I believe he knew.

Other than "growing up" with Marilyn, I don't know what it is about this film that makes me want to see it so much.  I like movies that show the real side of celebrity.  One of my all-time favorite movie lines is in the movie "Notting Hill" where Julia Roberts plays a famous actress who travels to England and meets bookseller, Hugh Grant, and they befriend each other even though he's initially blinded by her celebrity.  At one point she says something like: "You know, this fame thing,  it isn't real."  That's what I feel this Marilyn movie shows -- a real woman who was not just an image but an actual person with feelings and a very high sensitivity.  With all the fakeness around me, the Kardashians, and ALL the reality TV shows, it is refreshing to finally see something REAL.
Posted by Chrissi at 9:33 AM No comments:

Top Ten Reasons You Know You're Getting Older

10. You turn on Classic Rock radio and they're playing music from the 1980's.


9.   It doesn't frighten you to use your cell phone for talking rather than texting.
8.   If you ever lived in a "Real World" house, they'd put you in jail for murder by the end of the season.

7.  You mention "The Brady Bunch" and "Three's Company," and your co-workers have no idea what you're talking about.

5.  You find that having a wire constantly sticking out of your ear is strange and rather uncomfortable.

4.  You can remember a time when sex tapes ruined celebrities' careers rather that furthered them.

3.  You used to be hired as an office temp because the company needed temporary help, but now it's because they prefer permanent help from someone who isn't entitled to benefits.

2.  You can in all honesty say you learned to cook from your mother and grandmother not from Rachael Ray and Lidia.

1.  You no longer look at people older than you and say,"I know I will never live like them. Nope, that'll never be me."
Posted by Chrissi at 9:23 AM 2 comments: