We All Think We're Marilyn Monroe 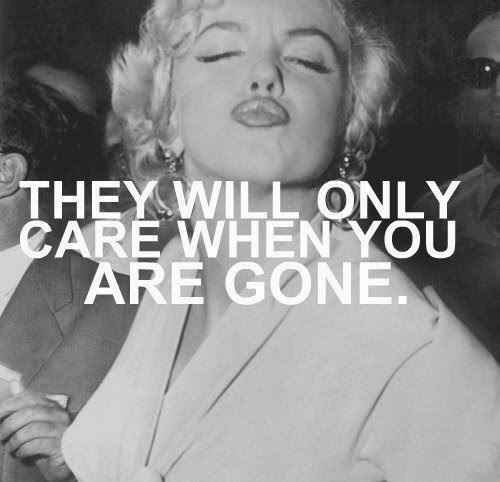 Everyone hopes to be remembered after they die. The first famous person I was aware of who had died but was still being talked about years later is Marilyn Monroe. My dad was obsessed with her, so I knew who she was pretty much from birth. We had a large mirror of her face in my parents' bedroom, and I remember playing with a small, plastic, inflatable pillow that said "Some Like It Hot" in the backseat of my dad's car.  My parents' bedroom was strewn with books about her mysterious death (my dad believed she was murdered because she threatened to tell of her affair with Robert Kennedy which would have ruined his political career). He wore a silver Marilyn Monroe belt buckle and had a black T-shirt with a gold iron-on of her face. He said she died when she was 36, and I said that was old, but he assured me that was indeed very young.

Marilyn Monroe left a legacy of her many films, and her image is still seen on virtually everything from shower curtains to cell phone cases to clocks -- 52 years after her death! Even in her wildest dreams, I don't think Marilyn ever imagined people would still be looking at her pictures and talking about her so many years after she died. Although she was famous, she only lived to 36, and she probably was too busy living to spend much time thinking about what her legacy might someday be. But it seems like nowadays, everyone I know who is 36, and even younger, can't stop planning for the end of their lives. Some have jobs that promise a pension once they reach their retirement ages, and they spend their lives in seeming anticipation: Each day, they get up for work and count the days until Friday. Then they count the weeks until the next month because those months will lead to their two-week vacations, and from there, they count the years leading to when they know they can retire and collect their pensions.

After that, since most people aren't legendary film actresses like Marilyn Monroe, they live out their last years wondering what their legacy might be and who will remember them. This is probably why grandparents like to tell their grandchildren their millions of stories so they feel a piece of them will remain alive as each generation retells these stories.  Marilyn Monroe never had any children, but she had her films to live on after her. The rest of us live through our own children and younger family members who keep our memories alive.  High schools keep yearbooks forever, and whole towns remember who came before them: who ran the shops, who lived in which houses, and so on.  It's important to us that people still talk about us after we're gone.

But maybe it's better to stop all this planning and just enjoy today? Waiting for it, and planning for it, and expecting to be remembered, seems a bit self-important.  True, most people will be remembered. But I can't help thinking about all those news stories about earthquakes or other natural disasters hitting somewhere far away from us, wiping out entire towns and its inhabitants in a matter of minutes.  Are these people any less important than we are?

Posted by Chrissi at 4:53 PM No comments: