I Wish I Were A Weeki Wachee Mermaid 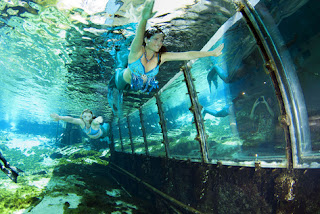 Weeki Watchee, Florida is "The Only City of Live Mermaids."  When I was little, my parents took me there to the underwater theater to see the live mermaid show.  I watched the mermaids in awe as they stayed underwater, breathing through hoses while they swam and acted out an action story.  Outside the theater, there was a machine to put coins into to create your own mermaid figurine.  When it popped out, it felt like wax.  Mine was a blue mermaid riding on a seahorse.  I kept it all the way into adulthood, but one day, I threw it away along with my dreams of becoming a mermaid myself.

My fascination with mermaids began even before my Weeki Wachee visit when I came across a record in my parents' collection called "The Lonely Mermaid."  It had a light blue and white label, and when I played it on my portable orange record player that had a white cover that closed and a handle for carrying, it sounded so sad.  I pictured one mermaid sitting on a huge rock in the middle of the ocean as she listened to that sad song.

A few summers later, we got a 4-foot, round swimming pool installed in our backyard.  I remember sitting with my dad in our screen porch, both of us fascinated while we watched the men dig and dig to put up our Esther Williams swimming pool.  I learned to swim in that pool and discovered I enjoyed being under the water even more than above.  I often pretended I was a mermaid in captivity, living in my own 4-foot deep, contained water tank.  But I spent too much time underwater, and one of my ears began to hurt.  The doctor said I had "Swimmer's Ear," and I needed to take drops and wear earplugs from that point on.  Turns out I wasn't really an actual mermaid.

But to keep my dream alive, I began collecting mermaids. When I went away to college, I brought my few mermaid dolls and two really cool ceramic mermaids along with me.  But on one of my return visits, I discovered that my best friend, Ania, had started her own mermaid collection, and hers was way better than mine!  Her new friends were world travelers, and they always remembered to pick up some rare, handcrafted piece for her that they had bought from some place exotic.  Soon after, I abandoned my own collection because my Disney Ariels just couldn't compete with Ania's new beauties!

So, I couldn't become a mermaid, and I couldn't surround myself with mermaids, but I still had the ocean.  The ocean brings me home.  When I stand at the edge of the ocean and breathe in the salty air, I feel like I'm where I'm supposed to be.  When I swim in the ocean, I like to float on top of the water.  My favorite time to float is right after a big wave comes to shore and it's followed by a small, yet wide wave that is calm.  When I jump with it, it pushes me up gently, and I'm floating and soaring.  These days, I'm content with the jump, although I used to swim a lot more.  Instead of staying put when that big wave came, and waiting for the smaller one, I used to turn around and swim back to shore along with the big wave.  Sometimes, the wave was so huge, it whipped me roughly back to shore, knocking me down, in a rocky landing. During those times, I wished I were a real mermaid because as a mermaid, I'd have no problem staying afloat with my fishtail!

Even though I can never be a mermaid, it doesn't mean that mermaids don't exist.  After all, the oceans' depths have not been completely explored by humans, so I'll never know for sure if there really IS a lonely mermaid sitting on a huge rock in a hidden section of the ocean somewhere, just like the one I pictured in that sad song.

Posted by Chrissi at 6:57 PM No comments: