The Cicadas Are Coming!! But Why Am I Happy About This? 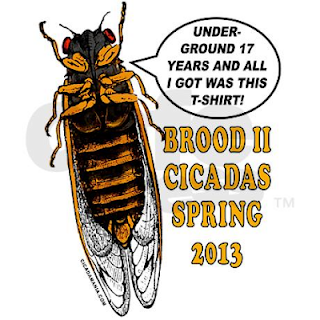 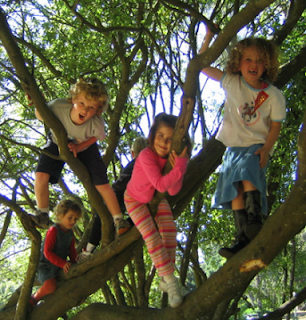 The cicadas are coming back to New York City after 17 years, and most of the people talking about it are completely freaked out! We're going to see them here on Staten Island more than on the other 4 boroughs, and word is that the streets will be covered with them, and that at night, they will sing so loudly outside, it will sound like a thousand lawn mowers.  People are really agonizing over their arrival, asking: Will they jump on us as we walk down the street? Will they follow us into our houses in swarms? Normally, I'd be in on the anxiety.  I know what it's like to anticipate things and worry about them needlessly.  A few years ago, I worried every time a piano gig was coming up.  Had I practiced enough? Would I remember how to play the music once I got up there onstage?  Or worse still, I'd flood my mind with questions like: How is it that the mind can even remember how to play the music? What sends the signals from my brain to my fingers? And will my brain send the signals fast enough?  That is definitely overthinking it, but worry has always been my middle name.  But these ugly, red-eyed swarms of bugs? I don't feel any trepidation about the reappearance of them at all.

One of my favorite summers was when I was 10 years old and the cicadas crawled their way into my hometown neighborhood.  Although they never did come into our house, I did see them everywhere outside.  By the end of the summer, they were still strewn dead all over the street. They really were everywhere.  Every morning, my dad and I would watch TV in the living room, he on the couch and I in my favorite chair, and we could hear them very loudly from outside.  I don't know if they lived in our Sycamore tree right outside our second floor window or just outside in the bushes and grass, but we could hear their unusual buzzing, even over the volume of our TV. We heard their singing the entire morning. I remember drinking my glass of Strawberry PDQ Milk while we'd watch game shows. Then, after morning TV with my dad, I'd go outside and play with all my neighborhood friends.  There was my best friend, Ania, who lived on the corner, and all the boys who lived on her street.  We'd play Kick the Can or swim in each other's pools. There were other summers like that but only a handful.  So when I think of that year the cicadas came out, I associate them with one of those precious and few summers.  Same thing goes with spending time with my father.  He died when I was 15, so the summer when I was 10 was a precious and extraordinary summer too.

Overall, I don't like bugs, except for illustrated versions of them made to look cute with big eyes and long eyelashes. When I was a teenager, I liked this song called "Hey There Little Insect" which was poppy and catchy.  I found out it was by a not very popular but very original singer named Jonathan Richman.  The song got me to reading about the symbolism of bugs. I read that if you like bugs, you have a negative ego, and if you dream of bugs, it means you are worried or annoyed about something or that there is a part of yourself or a situation in your life that you don't want to face, some kind of truth.  Having a negative ego will consume you with worry and anxiety. If I liked all bugs, maybe I'd be onto something.

But logically, cicadas are really nothing to worry about because they don't actually bother you.  They don't sting or bite or come into the house so there really is no need for anxiety, they are just something to look at.  That's another reason why I prefer to have a positive ego when it comes to  cicadas.  Besides, I have other things to worry about -- like a mosquito giving me West Nile Virus, or getting a dangerous allergic reaction to a bee sting, or termites eating my house, just to name a few.