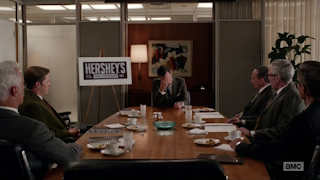 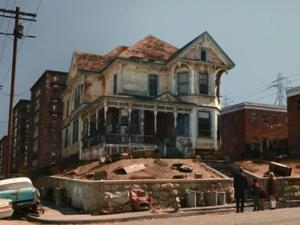 "And then I realized, I don't know anything about you."  These are Sally Draper's words to her father, Don, during an "edge of your seat" episode of this season's "Mad Men," its sixth.  I enjoyed every minute of Season 6 which led up to a breathtaking finale which saw Don's life unraveling into misery until the finale's very last seconds. I'm already longing for "Mad Men" which used to air every Sunday night, but maybe blogging about its finale will help me miss it less tonight.

"Mad Men's" writer and creator, Matthew Weiner, kept the manuscripts for Seasons 1 and 2 in his briefcase for ten years before he sold the show to AMC. It's obvious that he spends a lot of time thinking about his characters because each season plays out like a mini novel with plot twists and foreshadowing elements planted so purposefully, I enjoy them even more during second viewings when I already know how things turn out but can appreciate the genius of what he'd been doing to lead up to all those "a-ha!" moments.

"Mad Men" takes place in the 1960's, and Weiner takes great care to make sure everything in each show is authentic to the sixties, even down to the train route Don takes.  "Mad Men" IS Don Draper, an advertising executive on Madison Avenue who grew up poor but stole a dead soldier's identity and privileged background.  Even Don's wife, Betty, doesn't know this fact or anything about his past until Season 3 which prompts her to divorce him.  Their children, Sally, Bobby and Gene still don't know, and a major storyline of Season 6 involves Sally's frustration at knowing so little about her dad.

Sally's quote at the beginning of this post was uttered after she spends the night talking to an intruder who breaks into Don's and his new young wife Megan's apartment while Don is high at the office on a speed trip injection that all the ad execs received from a "Dr. Feelgood" who told them it was vitamins and would help them work faster on their new Chevy account.  Megan is out late schmoozing with theater people in hopes of landing a play even though she's already a soap opera star.  So Sally is alone with her younger brothers, startled out of her sleep by an older African-American woman who claims to be her "Grandma Ida."  She tells Sally that she raised her handsome daddy.  Since Sally doesn't know anything about her dad, she believes that Grandma Ida really was invited to the Draper residence in the middle of the night and doesn't think it strange that Grandma is wrestling with their TV while commenting that it's screwed in "good!" Finally, Sally comes to her senses and sneaks in a call to the police, but Grandma Ida catches her and suddenly isn't so "grandmotherly."  She holds Sally hostage, and when Don arrives home, he finds the police in his apartment and Sally feeling guilty.  The next day, Sally tells Don that she was stupid to believe Grandma Ida's story, but Don assures her, "I left the door open.  It was my fault."

All of Season 6 is essentially about Don "leaving the door open," and about doorways in general.  In past seasons, Don's door is always shut as he carefully protects his successful adman persona, while inside feeling like the poor, neglected farm boy he truly is.  But this season, Don's door to his past opens up to us through flashbacks of a teen aged Don living in a whorehouse.  He spies on the prostitutes through the doorways which sheds some light on why he is now a chronic cheater who has trouble trusting women and sustaining mature and healthy relationships with them.

By the start of Season 6, Don is pulling away from Megan and is having an on-again/off-again affair with Sylvia who is the wife of his downstairs neighbor and friend, Dr. Rosen.  During one of its "off" periods, Don wants Sylvia back so he begins leaving his back door open so he can sneak downstairs and spy on her through her front door (again, the door symbolism) without Megan or Dr. Rosen finding out.  His leaving his back door open is what allows Grandma Ida to get in that night poor Sally was held hostage.  But Sally becomes even more damaged after Don wins Sylvia back, and Sally catches them in the act through an open door in the Rosen's apartment.  Don is devastated, and he fears Sally will tell Megan.  When he sees Sally later on back at the apartment, she won't talk to him, so he speaks to her through what, but of course, the bedroom door:  "I know you think you saw something," he tells her, but "I was comforting Mrs. Rosen."  I know she's a teenager, but if Sally believes THAT, Don has got a bridge to sell her.

Which brings me back to the Season 6 finale.  Don is on a downward spiral.  He's drinking constantly and clashing with his co-workers, and seemingly tired of living up to the image that everyone has of him yet was built on a lie.  It's two days before Thanksgiving, and Don is getting drunk in a bar when a preacher tries to talk about God to him. Don punches him out, and the next thing we see is a flashback of a preacher being thrown out of the whorehouse where teen aged Don lives.  Don follows the preacher out down his front steps and watches the preacher gather himself together.  The preacher tells him:  "The only unpardonable sin is to believe that God cannot forgive you."

Next, we flash back to Don the man who is spending the night in the "drunk tank" for punching out the preacher in the bar. This night changes Don, maybe.  The next morning, he resolves to change and make a fresh start. He goes to work without having a drink and prepares to pitch the agency's campaign to the Hershey's Chocolate Bar people.  He tells them that when he was a boy, his dad would take him to the drug store and tell him he could pick whatever he wanted.  He says that he always chose the Hershey's bar because "the wrapper looked like what was inside."  Of course, the story he is telling the Hershey's people is completely untrue.  Don's dad was an angry, poor farmer who never bought him a chocolate bar.  We also know that Don is the opposite of a Hershey's bar because his "wrapper" isn't anything at all what he is like on the inside.  Don's hand begins shaking because he is going through alcohol withdrawal, but suddenly, we know he is going through more than that. He is having a complete breakdown in the middle of an important sales pitch.  "I grew up in a whorehouse in Pennsylvania," he begins.  This is a HUGE moment in "Mad Men" history.  Don's fellow partners don't know that Don didn't grow up with the same privileged backgrounds that they did.  After Don's admission, "Mad Men" can never be the same.  He continues to tell his TRUE Hershey's bar story by saying that the only time he ate Hershey's bars was alone in a room at the whorehouse when one of the prostitutes would buy him one after seeing him go through a john's pockets.  This is the true story, and the next morning, on Thanksgiving, his partners inform him he will be taking a mandatory leave of absence, effective immediately.

But in the final minutes of the finale, Don doesn't seem to care.  He picks up his children, Sally, Bobby and Gene, and takes them for a car ride during which his son Bobby exclaims, "This is a BAD neighborhood."  We don't know where Don is taking them, until the camera pans out, and we see that same white whorehouse we've been seeing all season long in the flashbacks featuring the teen aged Don.  It is worn out and broken down now, but it is positively the same house.  He tells his kids, "This is where I grew up."  Finally, we know that Don is going to begin opening up to his kids and telling them the truth about his childhood.  It may be a small first step, but through all the turmoil of Season 6, we feel like we've gone full circle with Don.  We can finally begin forgiving Don for the things he's done because we realize he is willing to change. Just like the preacher said:  "The only unpardonable sin is to believe that God cannot forgive you."  Beautiful, breathtaking, "Mad Men." 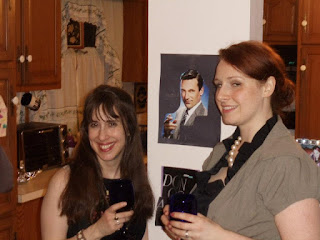